Robin Hines has been making art for a long time. He’s a pragmatic and practiced artist who’s been more or less making his living by his ability to paint all his life. But that doesn’t mean he’s stuck in one genre or one style. He prefers to experiment and try his hand at whatever takes his fancy this year or this day and to try 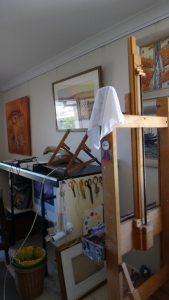 something else another day. He’s the first to admit this hasn’t endeared him to an art world that expects painters to stick within the margins of a developed style so they can be neatly classified and valued accordingly.

I visited Robin’s studio in the small coastal town of Tin Can Bay on a heatwave day when even he and his wife Helen had succumbed to turning on the airconditioner while they waited for the sea breeze to kick in. The studio is large, light and friendly with the usual clutter of the artists trade, brushes, models, canvas, easels, paint jars and more, and right outside an extensive garage holds the ‘archives’, work left over from a lifetime of painting, and a few more tools of trade.

Robin and Helen have led a peripatetic life from when they were married 50 years ago, living in many places and many houses here and abroad, travelling Australia a few times,  and enjoying the thrill of new places, until they built their house in Tin Can Bay eight years ago. Robin trained as a sign writer, a trade that was in demand before the digital age, which allowed them to make a living in a variety of situations.

The title of the G150 exhibition ‘Now and Then’ is a great description of Robin’s approach to making the works that will be shown in the exhibition. Modern day iterations  of objects will be shown alongside museum objects from the past.

He’s also been working on an interactive map that will be shown on the walls of the gallery foyer.