David Hodges knew right from the beginning that he was going to put together a new media work that built upon and reiterated the message of the National Trust property, Brennan and Geraghty’s Store Museum. His interaction with the collection immediately developed into a collaborative working arrangement with curator Ken Brookes.

David applied his considerable skills in graphic design, digital 3D modeling and video production to producing a touch screen installation that interpreted various significant items in the Brennan and Geraghty collection. In doing so he also created a lasting resource for the National Trust.

The video can be seen in a modified version for the internet here http://davidhodges.net/dms/brennanGeraghty/index.html. There are also some working videos and a summary from David of his approach to his work on the Collective Insites ABC Pool site.

For the group exhibition David’s installation was housed in a strange tardis-like construction made from old wooden election booths, which is shown under construction below. 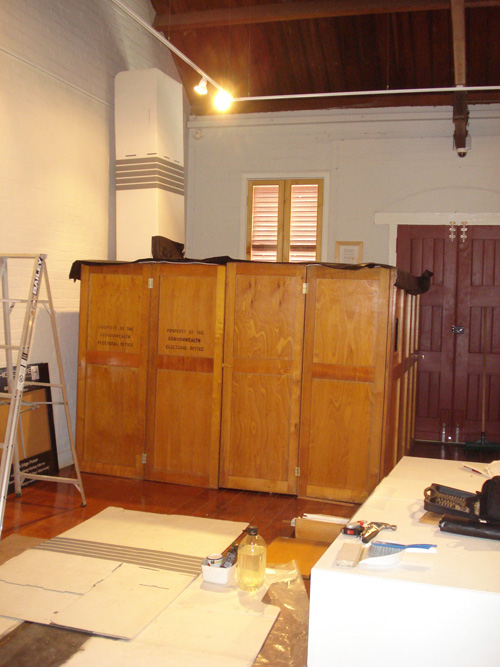 Visitors operated the touchscreen outside the booth and peeped through holes to see the large screen projection inside, an idea reminiscent of the old Victorian peephole shows.

The openings for the screen and peepholes were framed in ornate gilt , the whimsical idea of  Trevor Spohr who helped David construct the booth. It was an interesting juxtaposition of old and new, and fitted well with the theme of David’s work.

The touchscreen mounted in the viewing booth.

Peepholes were available at various heights.

This entry was posted on June 22, 2020, 11:29 am and is filed under Collective Insites. You can follow any responses to this entry through RSS 2.0. You can leave a response, or trackback from your own site.